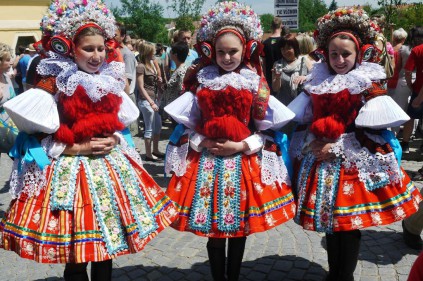 ...
The term “Czech” refers to the cultural characteristics of the Czech-speaking inhabitants of the Czech Republic which includes Bohemia, the larger western part and Moravia, the eastern part.

Northern Moravia includes Silesia, a historical region that lies mostly in southwestern Poland. The Silesians of the Czech Republic tend to maintain their ethnicity.

Czechs call their culture ‘česká kultura’. The historical and geographic term “Bohemian” is misleading, as it not only excludes Czech-speaking Moravians but includes members of several ethnic minorities that live in Bohemia but do not speak Czech.

The first ethnically identifiable inhabitants of the area were a Celtic people who lived there from the fourth century until about the second century. Slavic-speaking groups made the area their homeland no later than the sixth century. West Slavic tribes inhabiting the Bohemian territory gradually were united by the politically dominant Czechs and came under their leadership by the ninth century. Moravian tribes were united even earlier than those of Bohemia. The ethnic badge of all these groups consisted of the various dialects of the Czech language.

The Czechs are mostly considered quite reserved people with low self-confidence and passivity towards anything. They attach much more importance to family than to success. The historical background influenced self-confidence of the nation and the fact that they are reserved is connected with the fact that they don’t accept any novelties and are too conservative. However the young generation is considered different.

Although the Czechs are considered reserved and passive to anything they have a good sense of humor and love to smile and laugh. They love to spend their free time with their friends and families discussing anything and are very friendly and sincere.

Comments to "The Czechs"