Home\News\The Czech police will get new uniforms in 2016

The Czech police will get new uniforms in 2016 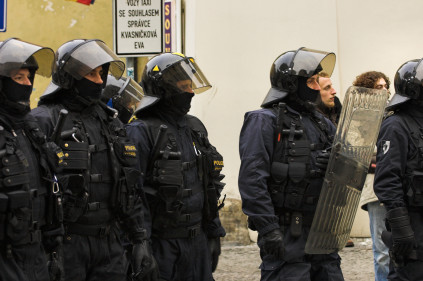 The Police of the Czech Republic are an armed security corpse with competences for the whole territory of the state.

The main responsibilities of the police are internal security and order within the country as well as to protect citizens’ property and safety.

From 2016 until the end of the 2019 the Czech police will get new uniforms. Police Presidium says that the project for some 40 000 men and women will cost about 130 million crowns. All the costs will be covered from the means the police corps has within its routine budget.

The current outfit of the police is often the target of criticism. Some parts of it will no longer be used. This applies to women’s hats, for instance. The police officer’s insignia will also be changed from eight-pointed to five-pointed star. The old insignia will be valid for another four years, during which the police uniforms will be replaced.

The new police uniforms are partly inspired by those of their counterparts from Austria, Germany and the Netherlands. Dark-blue to black color will predominate in the new uniforms and there will be a red border. All the outfits will be tailor-made. Ranks will also have a new look and the eight-point silver stars will be replaced with the five-point golden stars.

The uniforms should resemble clothing from the period of the First Republic (1918-38). The current outfit replaced the green uniforms worn by members of the communist National Security Corps.

Comments to "The Czech police will get new uniforms in 2016"