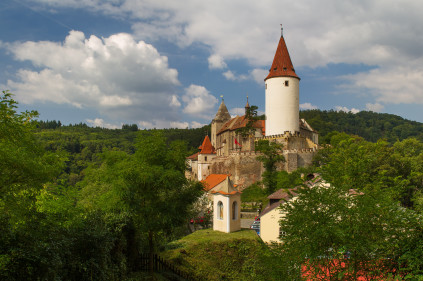 Krivorlatsko and Rakovnicko is a region of the Czech Republic lying on the border of Central, West and North Bohemia. This area is intersected by a great number of cycle paths and hiking routes. There are also hops of the highest global quality are cultivated. Krivorlatsko and Rakovnicko are dominated by the River Berounka which was created by the confluence of four rivers near the city of Plzen.

A dominant feature of the area is Krivoklat, one of the oldest of Czech castles. The intensive and magnificent structure was a representative seat of Czech kings hidden in the deep forests which served as royal hunting grounds. The most valuable part of the castle, with its monumental round tower, is the Royal Hall, the largest in Bohemia after the Vladislav Hall at Prague Castle. The Fustenberg Library located here will amaze you with its books numbering almost thirty thousand. One of the towers called Huderka was used to hold the legendary alchemist Edward Kelly, whose unsuccessful attempt at escape ended with a broken leg. You can explore a huge hunting collection in the Great Tower. An amazing example of high Gothic architecture is represented by the ruins of Krakovec Castle.

The Baroque Lany Chateau located in the forests of Krivoklatsko is the official summer residence of the presidents of the Czech Republic. It is usually only open to the public on the anniversaries of the birth and death of T. G. Masaryk, the first Czechoslovak president, but you can walk in the adjacent park all year round. The Rakovnicko area can also offer you a gastronomic experience. You can visit the Krusovice Royal Brewery during which you will find out how top quality Czech beer is brewed and how it tastes.