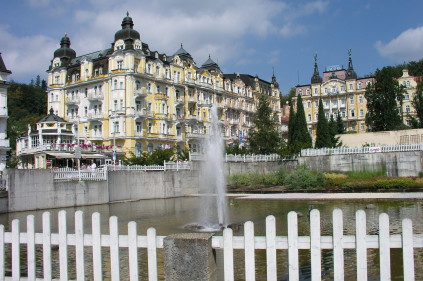 All sightseeing in city "Marianske Lazne"

Marianske Lazne is a spa town located in the Karlovy Vary region of the Czech Republic. The town is surrounded by green mountains with a mosaic of parks and noble houses. Most of its buildings are dating back to the second half of the 19th century when many celebrities and top European rulers came to enjoy the town’s incredible springs.

The history of Marianske Lazne, while relatively young, is closely tied to the ancient development and history of the whole part of West Bohemia. The Czech alderman Hroznata founded a monastery in the nearby Tepla in 1193 and summoned the Czech monks from the Prague Strahov Monastery.

It is unknown when people began to discover the healing powers of the springs. The springs, however, were utilized long before Ferdinand, King of Bohemia and of Hungary, attempted to use one of the springs (nowadays named the Ferdinand spring) for the manufacture of salt in 1528.

At the beginning of the 17th century doctor J. H. Hornik, the Cheb regional physic, prescribed baths in the waters of the Marie spring for his patients. So for many years sick people travelled from great distances to immerse themselves in the healing swamp mud, to drink unbelievable quantities of healing waters, and to bring these waters home with them.

Marianske Lazne was accorded the status of a town in 1865 and a further period of its building and development began. This period is linked with the personality of Dr. August Herzig, the progressive, foresighted mayor of the town. Many large buildings and facilities were built under his leadership – baths and bath-houses, a town hall, hospital, a dam, power works, sewers, canalization and street illumination.