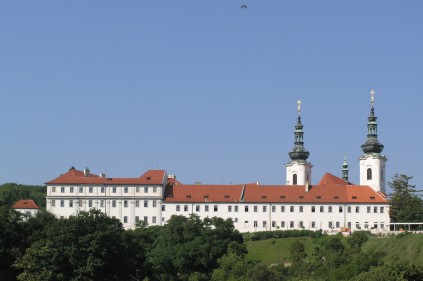 Strahov Monastery (Strahovský Klášter in Czech) was built in 1440 and is best known for its magnificent library which is decorated with magnificent frescoes and contains a collection of over 200,000 books. The monastery was built in 1140 by King Vladislav II on the approach route to the Prague Castle. It wasn’t really famous until 1143 when a group of Premonstratensians settled here. The Premonstratensians are a Roman Catholic order of canons founded in 1120 by St. Norbert. They are also known as the Norbertians or White Canons.

Strahov Monastery soon started to prosper and in a short time frame it became a center of intellectual and spiritual life. By the end of the twelfth century, most of the original wooden buildings had been replaced by stone Romanesque buildings. The monastery was rebuilt in the Gothic style after a fire destroyed the complex in 1258.

In the late seventeenth and early eighteenth century Strahov Monastery was expanded, this time in the Baroque style. After a bombardment by the French army in 1742 most of the medieval Gothic buildings were rebuilt in Baroque style.

The most interesting parts of the monastery are the Theological Hall and Philosophical Hall. The Theological Hall houses the theological book collection of the famous Strahov library. Besides valuable books, the hall also contains several geographical and astronomical globes from the seventeenth century. Philosophical Hall was built a century later between 1782 and 1784. The ceiling’s frescoes here are depicting the history of mankind and were created by Austrian painter Franz Anton. The two-story high hall contains books obtained from an old monastery in Moravia.