Official language of the Czech Republic 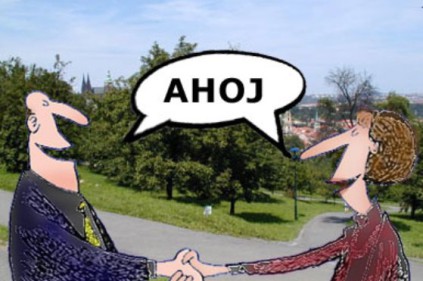 ...
The official language of the Czech Republic is Czech which is spoken by over 96% of its inhabitants. The Czech language belongs to the group of West Slavic languages like Slovak, Polish, Serbian, Russian, Croatian and Bulgarian.

Abundant usage of so-called diacritical marks is characteristic for Czech, i.e. hooks over certain letters and accents to indicate the length of vowels, which often change the meaning of whole words.

The origins of the Czech language date to the end of the 10th century when Czech began to separate from ancient Slavonic. The first written evidence of its existence comes from this period. In the Middle Ages Czech developed into a rich and elaborate language with a literature of many genres. With the expansion of the Bohemian state, the Czech language also spread beyond the borders of the national territory.

There is a relatively large characteristic difference between traditional standard written Czech and the language that is commonly spoken. The non-standard speech of the population is differentiated on a regional basis. In Bohemia, an interdialect predominates which is called common Czech. In Moravia there are more pronounced dialectal differences. The differences between standard written Czech and common Czech are striking.

Czech always places the emphasis on the first syllable of the word. For the most part, it has a declining sentence intonation. It only rises at the end in questions for which we expect a yes or no answer.

The similarities between Czech and Slovak led to the languages being considered a single language by a group of 19th century scholars. Standard written Slovak was partially modeled on literary Czech and Czech was preferred for some official functions in the Slovak half of the republic.

Comments to "Official language of the Czech Republic"