Charles Bridge (Karluv most in Czech) is a stone Gothic bridge that connects the Old Town and Lesser Town. During its first several centuries it was called The Stone Bridge (Kamenny most in Czech). The Charles Bridge was built in the 15th century to replace the older Judith Bridge which had been ruined by floods.

What makes the bridge so special is its rows of blackened baroque saints each attended by angels and lions and followers.

The bridge was commissioned by Czech king and Holy Roman Emperor Charles IV in 1357. Architect Petr Parler was in charge of the construction and it is said that egg yolks were mixed into the mortar to strengthen the construction of the bridge.

There are towers standing on each end of the bridge. Both sides (named Staromestska vez and the Malostranska vez) can be climbed for a view of Prague and the bridge from above. 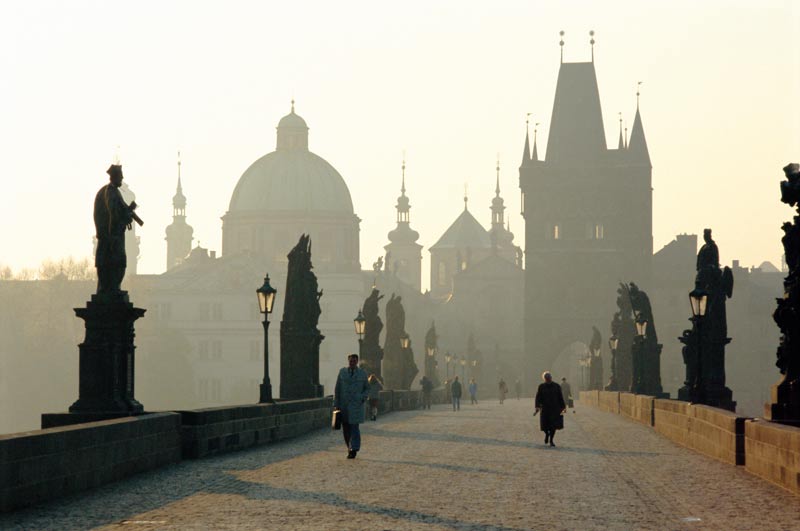 Baroque statues began to be placed along either side of Charles Bridge in the 17th century. Nowadays many of them are copies and the originals can be seen in the Lapidarium Museum. The most popular statue is the one of St. John of Nepomuk, a Czech martyr saint who was executed during the reign of Wenceslas IV by being thrown into the Vltava from the bridge. The statue has been polished to a shine by countless people having touched it over the centuries. Touching the statue is supposed to bring good luck and ensure your return to Prague.

A great time of the day to come to the bridge is at sunset when you can enjoy a breathtaking view of the fully lit Prague Castle. It is now a pedestrian zone and is almost constantly filled with people, so if you want to have it all to yourself, go there at night or very early in the morning.