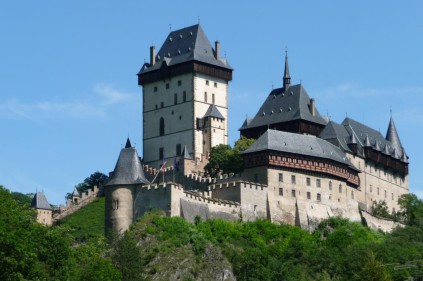 The Gothic Karlstejn Castle sits high atop a hill around 18 miles southwest of Prague. It was established by the Czech king and Roman emperor Charles IV as a place to store the royal treasures, collections or holy relics and the crown jewels.

The castle was originally built in the Gothic style and reconstructed in the Renaissance style in the 16th century. It owes its present look to the purist Neo-Gothic style designed by architect Josef Mocker at the end of the 19th century during the same period when the majority of Prague’s New Town was rebuilt. Karlštejn stands on a hill surrounded by other hills, so it cannot be seen until you get very close. Due to this clever strategy since it is impossible to see the castle from afar (and thanks to its thick walls) it was never conquered in the past.

The castle’s medieval turrets, towers, high walls and valuable artifacts make it one of the Czech Republic’s most visited attractions. There are several guided routes which you can take.

Route I takes about 50 minutes and provides lots of interesting information about the time of Charles IV and his life. You will be offered to see famed collection of “the worst portraits of Czech nobility” in the country. You can buy tickets for the Route I in the castle.

Route II takes about 75 minutes and starts with a visit of the Church of Our Lady and the St. Catherine Chapel. You will cross the wooden suspension bridge and arrive in the castle tower where you’ll see some original sculpture and visit the study of architect Josef Mocker. Then you will enter the beautiful Chapel of the Holy Cross where you will see the largest collection of Gothic paintings in the world. Reservations are required to take this route because maximum of 12 visitors are allowed to enter the Chapel of the Holy Cross at one time.