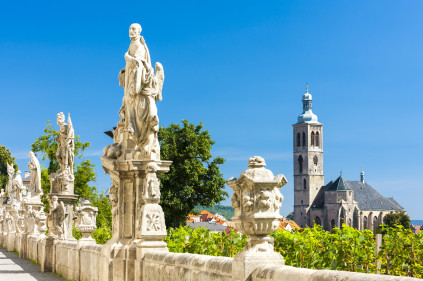 All sightseeing in city "Kutna Hora"

Kutna Hora is a city located in the Central Bohemian region of the Czech Republic. It lies on the high tableland above the Vrchlice River not far from Prague. The population of the city is about 21 000 inhabitants.

Kutna Hora began in the early 13th century as a silver-mining town. It was one of the most historically important towns in the Czech Republic. The royal mint was established here in 1300 and the town started producing the Prague coins. The royal mint, which was transferred from Jihlava by King Wenceslas II was in part of a royal residence called the Vlassky dvur (Italian court).

Lots of building took place in the 14th century, including residential houses, churches, one of the country’s most significant monasteries and the amazing Church of St. Barbara. Several fires damaged or destroyed many of Kutna Hora’s buildings including the Sedlec Monastery during the Hussite wars in the 15th century. The town was quickly rebuilt thanks to its continuing income from silver mining. When the silver mines were depleted in the 16th century, Kutna Hora’s wealth took a sharp decline as did the growth of the town. Many of its churches were later closed down or torn down in conjunction with Emperor Joseph II’s religious reform in the late 18th century. Kutna Hora’s architecture is defined by these events.

The historical town center is included in the UNESCO World Heritage List due to its interesting history and a variety of sights. All of the streets, houses and churches exude a long history full of important events. The symbol of Kutna Hora is the unique late Gothic Cathedral of St. Barbara.

Kutna Hora region has a long tradition of wine-making culture. You can take a cycle path which will take you from the picturesque square to the Pod Sukovem vineyards. The circuit which is 6 km long connects the historical center of Kutna Hora with the vineyards.