Home\Articles\Mushrooming in the Czech Republic

Mushrooming in the Czech Republic

It is said that mushrooming is a Czech national sport and that this phenomenon is unique. Czechs are also the best experts in identifying mushroom species.

The Czech love of mushrooming is well-known. Mushroom hunting and picking is very popular among Czechs. Due to their enthusiasm, they are often considered as mushroom fanatics.

The statistics show that over seventy percent of Czechs go mushrooming at least once a year, and about one fifth of them see themselves as passionate mushroom pickers. For most people, mushrooming usually means a chance to relax and enjoy the time they can spend in the forest.

The Czech mushrooming passion is deeply rooted in history. People have always picked mushrooms in the Czech lands. In old times, mushrooms were called the meat of the poor. Markets were full of them and absolutely anyone could afford to buy them. In those times, picking mushrooms was an important food source. Later it developed into a free-time activity and much later it became a tradition. 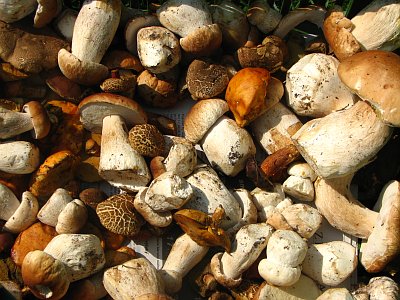 The mushroom season in the Czech Republic usually begins in May and culminates in September. In the woods, Czechs usually pick only those mushroom species that they are able to identify by name. The preferred method of preservation is drying – the oldest and most natural way of mushroom storage.

Many of the edible varieties of mushroom grow wherever there are trees as they live in a symbiotic relationship with the roots. Other species can be found in fields and sometimes on the lawns. In general you can find mushrooms in any place where there is ample vegetation.

It is important to consult the visitor rules, as you can pick up mushrooms in national nature reserves or national parks, which is forbidden. It is possible to go mushrooming in limited areas of national parks and protected areas, but you will need to get the permission.

Comments to "Mushrooming in the Czech Republic"