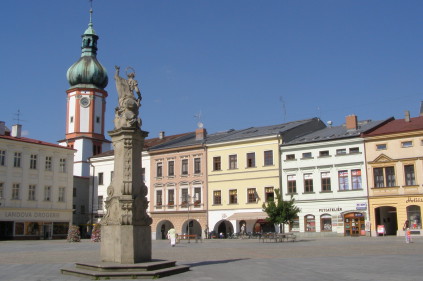 All sightseeing in city "Frydek-Mistek"

Frydek-Mistek is located in Moravian-Silesian region of the Czech Republic. It consists of two formerly independent towns of Silesian Frydek and Moravian Mistek. Both towns were united in 1943 and today’s name has been used since 1955. Lying at the confluence of the Ostravice and Moravka rivers the city has a population of about 60 000 inhabitants.

There are two historical centers in the Frydek-Mistek which have been rebuilt so nowadays you can admire beautiful facades of originally Renaissance houses on Castle Square in Frydek and burgher houses with archway on Freedom Square in Mistek.

When visiting the city it is advisable to see the Castle of Frydek which is a Gothic castle with the heart from the first half of the 14th century later adapted. Nowadays the castle houses the Museum of Beskydy and offers two expositions for tours – a castle tour and an extensive exposition of the Beskydy Mountains and Beskydy region documenting the history and culture of Beskydy area.

There are also lots of interesting places to visit such as National Hall (Narodni dum), multifunctional facility called Vlast and many amazing churches like Church of St. Josta, the Church of All Saints, vicarage church of St. John the Baptist and many others.

The city offers different kinds of sport activities such as yachting, surfing and fishing at the nearby artificial lake Olesna. There is also relaxation indoor and outdoor complex in water park with the charming overview of the Beskydy panorama. Also you will find a training wall for climbers and many possibilities for going in for sports.