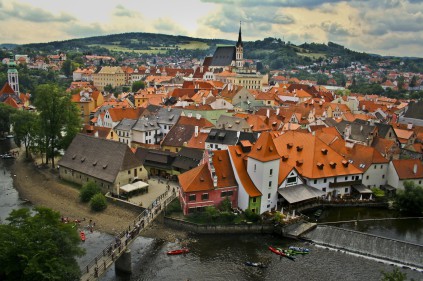 All sightseeing in city "Cesky Krumlov"

Cesky Krumlov is located in the South Bohemian region of the Czech Republic. This is the second largest city in the region. Thanks to its unique preserved medieval core, Cesky Krumlov is included on the UNESCO World Heritage List. The town grew up around a Gothic castle, built on the cliffs above the Vltava River by Bohemian nobles in the mid-13th century.

The original Gothic castle, upon which the town of Cesky Krumlov was based, was founded by the Lords of Krumlov around 1253. The castle, which, following the Prague Castle is the second largest in Bohemia, has five courtyards and a large park. The castle also boasts an extensive collection of Renaissance and Baroque art. The castle premises feature one of the best-preserved Baroque theaters in the world, and another unique theater – with a moving stage – is located in the park. Fans of art will probably be attracted by a number of galleries in Cesky Krumlov.

The city is a cultural center with a dozen museums and galleries, a medieval castle complex with beautiful gardens, historic and modern theaters, including the Castle Baroque Theater built in the 1600, and the revolving auditorium, built in the 20th Century, and hundreds of cultural events each year.

This small, picturesque town is a frequent host for conferences in the arts and sciences. It also boasts several retreats for artists, writers, and musicians.