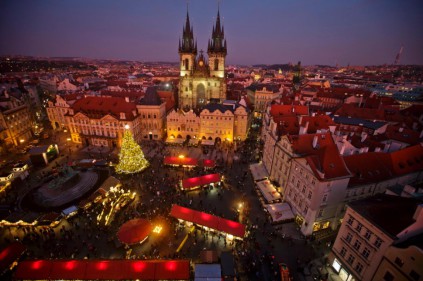 For many Czechs, December 24 (Stedry den) is the most enjoyable day of Christmas holidays. Its Czech name literally means "Generous Day" due to the wealth of food that has traditionally been served for Christmas dinner.

The Christmas tree is decorated with traditional Czech Christmas ornaments in many households and preparations are made for the most festive dinner of the year. Christmas Eve is associated with many superstitions that usually relate to life, love, and destiny that awaits one in the year to come. According to one Czech Christmas custom, one is supposed to fast all day to see the “golden piglet” (zlate prasatko) in the evening.

Dinner is served after sunset (traditionally, it should not be served until after the first star has come out) and consists of carp and potato salad, sometimes preceded by mushroom, sauerkraut or fish soup. Christmas carp is specially raised in manmade ponds and then sold from large tubs placed on the streets and town squares a few days before Christmas. Dinner can be finished with dessert, such as apple strudel. Traditional Christmas bread called vanocka used to be a part of the Christmas dinner in the past but today it has largely lost its Christmas connotation and is available year-round.

After dinner, everyone around the table may sing Christmas carols before moving to the Christmas tree, which is all lit up and beautiful. By then, presents have been placed under the tree. Czech children believe that Christmas gifts are brought by Baby Jesus (Jezisek) who comes into the room through the window to leave the presents.

Some people end Christmas Eve by attending the midnight mass at a local church. It usually starts at midnight but some churches hold it earlier, such as at 10 p.m. There can also be a Christmas Mass for children in the afternoon.