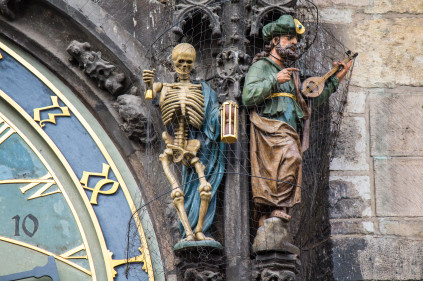 Prague Astronomical Clock which is over 600 years old is one of the greatest treasures of the city which still amazes people with its procession of Apostles, moving statues and visualization of time like no other instrument in the world. The ornate 15th –century astronomical clock is found on the southern side of Prague’s Gothic Old Town Hall.

Gilded and complex in design, the clock was made by Czech master clockmaker Mikuláš of Kadaň in 1410 although it has been repeatedly restored and added to over the centuries. Its upper face shows the time and day of the week, the lower one reveals delicately painted signs of the zodiac.

Every hour hundreds of tourists gather around the clock to witness the figure of Christ emerge from tiny trap doors above the upper dial of the clock, followed by a collection of wooden Apostles, to act out a mini-medieval morality tale, while the skeletal figure of Death strikes a bell, Greed counts out his money and Vanity worships his reflection.

With a help of the Prague Astronomical Clock you can tell what day it is and its position in the week, month and year as well as track Central European, Babylonian and Sidereal time. On the calendar with replicas of paintings by Josef Manes you can see which sign of zodiac currently reigns.

There are lots of legends about origin of the Clock. The most famous one is that it was built by Master Hanus in 1410. The city councilors at that time were so delighted with the clock that they later began to fear that Master Hanuš would build one like it for another European city. Therefore one dark night they had him blinded, and thus the wondrous clock remained only in Prague.