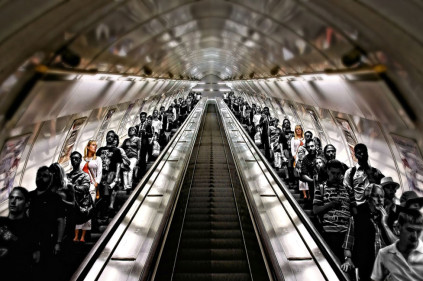 There are three metro lines in Prague. They crisscross the city and touch on almost every section.

You can get in any corner of the city via metro. The three lines interchange near the center of Prague, forming a kind of metro ring road around the center.

Besides walking the second best form of travel within the city is the metro. It is fast, reliable and safe. Besides the peak hours in the morning with people going to work and in the early evening, people going home, the metro is not crowded.

At the time of construction the communists were worried that Prague might be targeted by the West as a great place to drop a nuclear bomb. So they created the metro deep underground to doubly serve as a nuclear bomb shelter. Also the metro had to be built deep underground because it goes under the old buildings and river. And at the cross over stations the metro lines are stacked one on top of the other. So if you get out at one you will need to either go further down or up a level to get to the other station.

The metro system is very easy to understand. Just remember that there are three lines: red, green and yellow. They all intersect near the center of town. It does not matter which line you start off on – you can always get to any other one. And they all go to the center of town.

Buying a metro ticket can be a difficult task as there are so many buttons on the ticket machine. It is broken up into zones and times. So you can get a ticket valid for 20 minutes and 2 zones or a ticket valid for 90 minutes and 4 zones. When you come to the machine have an idea where you are going and how long it should approximately take. Look for number of stations and time duration. If you are not sure, just press the 90 minute button and get a ticket.

Just remember that getting a ticket is a two-step process. First you buy the ticket then you need to validate it. At the entrance of the metro zone are little yellow boxes. Insert the ticket into the box to get it time stamped.