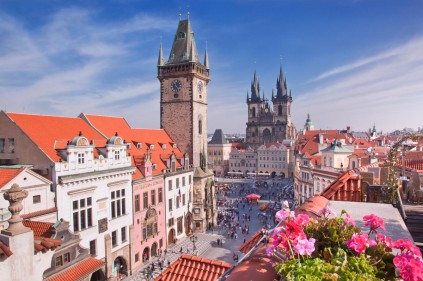 All sightseeing in city "Prague"

Prague is the capital of the Czech Republic and is one of the most famous tourist destinations in the world. Known for its historical buildings and rich cultural heritage, Prague was the capital of Bohemia, the capital of Holy Roman Empire for some time and the capital of undivided Czechoslovakia. It is the 14th largest city of European Union located in the north-west of the country on the Vltava River covering an area of 285 sq km with a population of around 1,262,106.

Prague is a beautiful and romantic city offering breathtaking views, quiet gardens, rides on riverboats and relaxing strolls along narrow cobblestone lanes. This is a beautifully preserved city undamaged by WWII with amazing architecture and an impressive number of stunning old buildings, winding streets and famous sights such as Charles Bridge, Old Town Square, Prague Castle and many more.  In 1992 the historical core of the city, covering 866 hectares was listed in the UNESCO World Cultural and Natural Heritage Register.

The city is served by the international Vaclav Havel Airport Prague, which is located 20 km to the northwest of the city. It is served by several airlines. Though Czech Republic has no high-speed trains, the city is well connected to the leading destinations of Europe by trains. The central station is located in the heart of the city. There is one station for international buses and one for regional buses in Prague. The city is well connected by road to all of Europe.

Prague enjoys a mixture of humid continental and oceanic climate. Summers are warm while winters can be really cold with frequent snowfall from mid November to late March. Though overall rainfall is low, thundershowers occur in summer.

The summer season is the most popular tourist season but this increases the congestion at the hotels. Spring and autumn are the best times to travel to Prague. Winters are very cold, but it is the best time to enjoy Christmas festivities and the famed Music Festival.