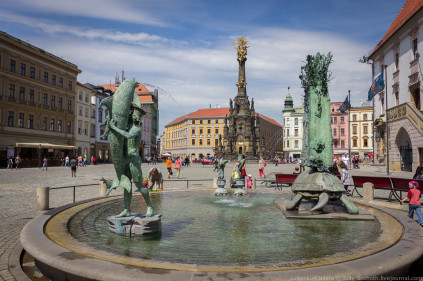 All sightseeing in city "Olomouc"

The city of Olomouc is located beside the Morava River in central Moravia. With around 100 000 inhabitants, it’s the fifth largest city in the Czech Republic. The centre of Olomouc is the largest historic preservation zone outside Prague, and its cobblestoned streets are lined with amazing cathedrals and grand palaces.

Olomouc has always been a centre for education and culture. There is a rich schedule of festivals in the city and no matter what time of year your visit occurs, you may catch one. The festival calendar includes the largest beer festival in the country, the International Organ Music festival (Sep. – Oct.), and the ten-day city festival in late June.

Despite its fascinating history and great beauty, you won’t find the crowds of tourists that are so common in more famous destinations. It’s a real living, breathing Czech city, with 1000 years of history and the vibrant, youthful energy of a university town.

Olomouc contains several large squares, the main of which is adorned with the Holy Trinity Column, 115 ft. high, erected in 1740 structure which was added as a UNESCO World Heritage site. The most prominent church is the St. Wenceslas cathedral, a Gothic building of the 14th century with a tower 328 ft high and the biggest church-bell in Moravia. Olomouc is said to occupy the site of a Roman fort founded in the imperial period.

Palacky University located in Olomouc is the oldest in Moravia and second oldest in the Czech Republic. It was founded in 1573 as part of effort to reestablish Roman Catholicism in the country. Most of its faculties were suppressed in the 1850s by the Habsburg regime. The university was fully restored in 1946. It was later renamed Palacky University of Olomouc.

The university plays a very important role in the life of the town. With over 25,200 students, Olomouc has the highest density of university students in Central Europe. Many of the town’s services are student-oriented. They close during holidays and the university exam periods.