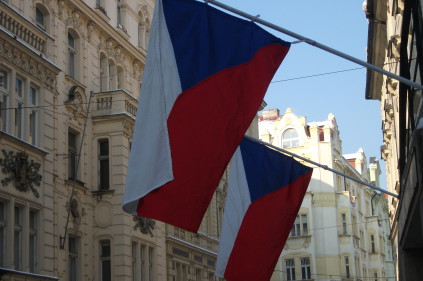 ...
The national flag of the Czech Republic (Czech: státní vlajka České republiky) is the same as the flag of the former Czechoslovakia.

The meaning of the flag

The flag reflects the state, and the reason why the white color was put the first is to represent that peace reigns in their country. The people also believe that conversing is the way to stop chaos instead of challenging each other’s bravery, so they placed red towards the bottom. According to psychological interpretations regarding triangle, the three sides is to see the meaning of the form and edges. So this means, a blue triangle tells an importance that the people should be vigilant, loyal and true, determined and fair.

The flag was banned by the Nazis in 1939, and a horizontal tricolor of white, red, and blue was enforced. The original flag was restored in 1945.

Despite the fact that Czech Republic flag may not have been adopted fairly it is still vital that this flag be treated with great respect. It should never touch the ground, when displayed with the flags of other nations they must all be flown at the same height. There are also rules about how any flag should be disposed of. If a check flag is torn, faded or tattered it should be burned in private.