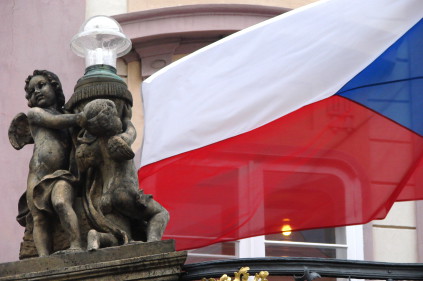 ...
The Czech people are descended from Western Slavs who settled in Bohemia, Moravia and Austria during the 6th and 7th centuries.

The Duchy of Bohemia emerged in the late 9th century. It was a rich and powerful state in the late Middle Ages which had a coat of arms dating from the 12th century that showed a double-tailed and crowned lion in white rampant on a red shield.

For centuries Bohemia was part of the Holy Roman Empire and, later, Austria-Hungary. As it was not independent, it had no need for a national flag. The lion emblem was used in flags for various purposes but had no international standing. When Czechs, Slovaks, and Ruthenians united in 1918 to form Czechoslovakia, a simple bicolor of white over red stripes was used as a national flag. It included the national colors of the Czechs and contained no symbolism for the other ethnic groups of the country. A white-red flag was being used by the neighboring country of Poland as its national flag.

In 1920 various designs were submitted for consideration as a new flag. The winning proposal incorporated a blue triangle at the hoist of the existing flag. Since the Slovak colors were red, white, and blue and the Ruthenian colors were blue and yellow, this gave symbolic reference to those parts of the nation.

The flag of Czechoslovakia disappeared during World War II but was revived in 1945 with no modifications. When the Slovaks broke away to form a separate country in 1993, the territory formerly known as the kingdom of Bohemia became the independent Czech Republic. Although promises had been made that neither state would use the symbols of the former Czechoslovakia, the Czech Republic readopted the Czechoslovak flag of 1920 as its own.