Temple of Hops and Beer in Zatec 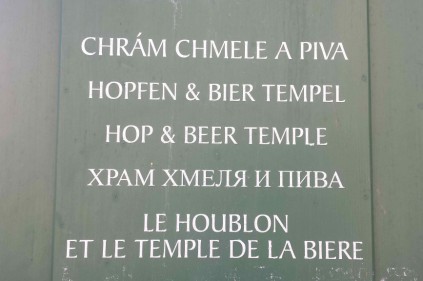 Beer is closely connected with the Czech Republic’s culture and the one produced in the country is considered among the best in the world. If you are interested in hop-growing and beer brewing then you should definitely visit the Hop Museum and the Temple of Hops and Beer located in Zatec.

The museum’s exposition is the largest of its kind in the world. It will acquaint you with the development of hop-brewing from the early Middle Ages to the present. The building of the museum is a prime example of functional industrial architecture. On the tour you will see interesting collections relating to the cultivation of hops and will learn about the most important figures of Czech hop-growing. Of course, you will also have the opportunity to taste the outstanding local beer made from the world-famous variety of Zatec hops called ‘cervenak’ (Semi-Early Red-Bine). In addition to the museum itself you will see a series of packing houses, unique hop drying rooms and storage warehouses.

Temple of Hops and Beer

Temple of Hops and Beer, where an entertaining and educational exhibition take place, is located not far from the museum. This is an amusement and educational complex, whose roots run deep in the tradition of the world-renowned hop-growing region. There is the Hop Lighthouse which offers a beautiful view of Zatec. You will be taken to the bowels of the observation tower by an elevator. At the top of the tower there is a viewing platform from which you can look across the Zatec region. During the tour you will also see the alchemist’s workshop and the largest hop cone made of crystal.

There is also the brewery restaurant which provides room to relax and where you can enjoy a pleasant atmosphere and taste an amazing beer and regional dishes.

Comments to "Temple of Hops and Beer in Zatec"