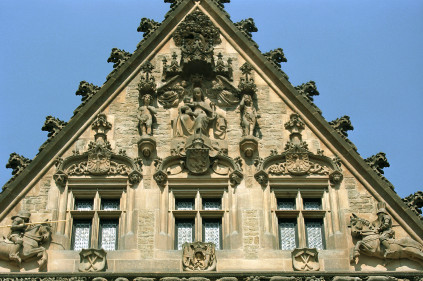 Stone House located in Kutna Hora in Czech Republic is one of the most important Gothic monuments in Bohemia playing a significant role in the whole Czech architecture. The building is great not only due to its age but also due to the fact that it bears signs of a lifestyle of that day’s people.

The house was built between 1485 and 1499 for townsman Prokop Kroupa who was raised to a noble rank in 1499. The house is easily identified by a high triangle-shaped gable with Gothic windows, rich decorated sculptures, Gothic pinnacles and a double gate. It is part of the historic core of the city, which is listed as a UNESCO World Heritage Site.

The house was called “stone” at first in 1660. Its present appearance is a result of several building stages. Two more floors and a gable were added in around 1489 to the original plan. The inner disposition was noticeably altered by reconstruction in 1839. The puristic reconstruction was led in the 20th century and tried to restore the original disposition before 1839. Nowadays the majority of the medieval sculptures of the façade were replaced with replicas and the Stone House is considered a worthy example of restoration methodology of the turn of the centuries in a perfect realization.

The shell of the building was in very dismal state and the intention was to renew the roof, truss, plaster, windows and stone carvings. In 1998, restoration of the interior of the Stone House started by reconstruction of totally unfunctional wiring and heating. Inner plasters were repaired and original flooring and stone-cutting decorations were restored. Also festive lighting was included in the finishing work.