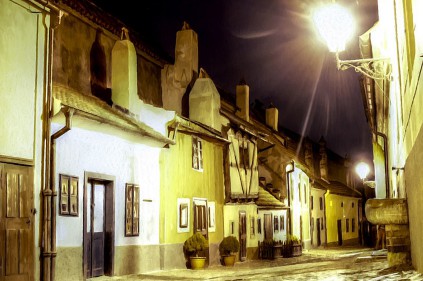 The Golden Lane (Zlatá ulička in Czech) is an ancient street which is located at the eastern end of Prague Castle near the outer wall. It dates from the 15th century and comprises 11 historic houses inside which period scenes have been created to show the life of the artisans who once worked, ate, drank and slept in them.

The small houses were originally constructed in the sixteenth century for the castle guards of King Rudolph II. At the time the street was known as archery lane. It was later renamed as Golden Lane for the goldsmiths who moved into the houses in the seventeenth century.

The street was originally lined with twenty-four wooden houses but one side of the street was declared unsuitable for habitation and demolished in the nineteenth century. Poor people and criminals lived in the remaining houses, but they were evicted after the Second World War when the street was nationalized. The houses were restored and repainted with lively pastel colors between 1952 and 1955.

Entrance to Golden Lane is payable, but visitors cannot buy a ticket for this alone. You need one of the Prague Castle self-guided visitor tickets, which cost 250czk (short visit ticket) or 350czk (long visit ticket), and include admission to other parts of the castle too. In the upper level of the houses are medieval armory and textile displays. Visitors can also try shooting a crossbow.

The street is now largely occupied by souvenir and book shops. Several well known writers used to live in the small houses. The most famous of them is Franz Kafka who stayed here at his sister’s house between 1916 and 1917. Another famous writer who lived here was Nobel Prize winner Jaroslav Seifert who lived in the 1930s in a now demolished building.