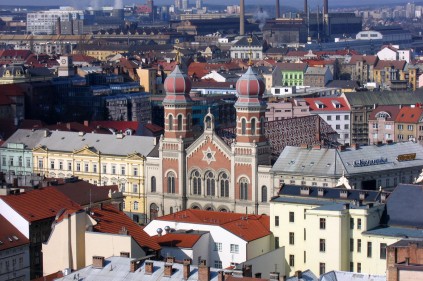 All sightseeing in city "Plzen"

Plzen is a capital of western Bohemia region of the Czech Republic. Established at the confluence of four rivers the city has existed for 700 years and has left a remarkable heritage. The city of Plzen has long been a cultural center for the entire West Bohemia. It is known worldwide for its engineering products, its Pilsner Urquell beer as well as for its many historic sights, international exhibitions and festivals.

The city dates back to 1295, and at one time was the third largest in the country, after Prague and Kutna Hora. Due to its location at the confluence of four rivers it was a busy trading city. A couple of fires in the 16th century destroyed much of the town centre which was curiously rebuilt by many Italian architects and builders. The houses on the city’s main square include glimpses of medieval, Renaissance, Baroque, Gothic and more.

Plzen is a centre of academic, business, and cultural life for the western part of the Czech Republic. The University of West Bohemia located in the city is well known for its School of Law, School of Mechanical Engineering and School of Applied Science in particular.

The Plzen is largely served by a network of trams, trolleybuses and buses. Like other continental European cities, tickets bought from vending machines or small shops are valid for any transportation run by the city of Plzen. For residents of the city, a Plzen Card can be purchased and through a system of “topping up” be used on any public transport with no limitations, as long as it is paid up and valid.

Plzen has a cool and temperate Oceanic climate. The city has low rainfall evenly spread over the year. Precipitation occurs on average every second day, and the number of days with thunderstorms is low. It receives on average 1700 hours of sunshine though winters have longer periods without sunshine. Winters are chilly but milder than some adjacent areas.