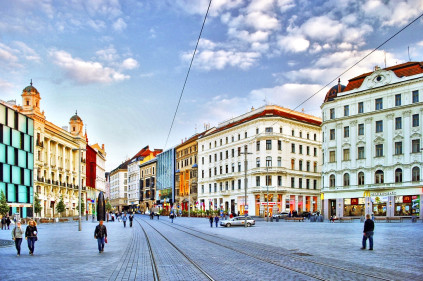 All sightseeing in city "Brno"

Brno is the second largest city in the Czech Republic as well as the gateway to the fertile vineyards of South Moravia. The city is located in Moravian region at the confluence of the Svitava and Svratka rivers and has a population of about 380 000 inhabitants.

Brno was once the industrial powerhouse of Habsburg Empire. Since the new millennium Brno has returned to its role of a leading university town, a business centre and continued to be the host to Europe’s largest trade exhibition ground. Brno Circuit, located close to the city of Brno, is known for two motorsport race tracks where the annual MotoGP Grand Prix of the Czech Republic is the circuit’s most important event.

To the north of Brno there is the protected area of the Moravian Karst and to the south stretch the Moravian vineyards with their typical wine cellars. The city is surrounded by beautiful mixed forests, which offer many opportunities for tourism and cycling. Brno prides itself on many notable historic sites that show evidence of its rich cultural history.

A dominant feature of Brno is the Gothic Cathedral of St. Peter and Paul on Petrov Hill, which is linked to several legends and which saved the city from the Swedish army during the Thirty Years War. Spilberk fortress rises up to the sky opposite the cathedral, formerly a highly feared prison, which is now used as a museum and gallery. The greatest architectural boast of the city is however Villa Tugendhat. The building itself and its interiors still fascinate visitors in the 21st century. Come and listen to the profound story of this Functionalist gem.

Brno has a borderline oceanic climate and a humid continental climate with cold winters and hot to warm summers. However, in last 20 years the temperature grows rapidly and summer days with temperature exceeding 30 °C (86 °F) are quite common.