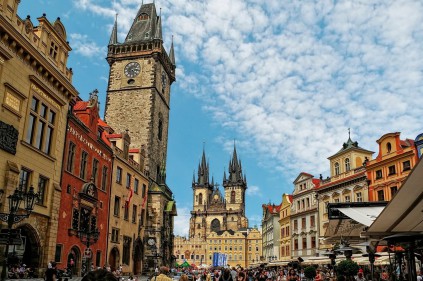 Dominated by the statue of Jan Hus, Old Town Square is one of the biggest and most beautiful urban spaces. The lively square is lined with magnificent buildings in different architectural styles, from Gothic to Baroque.

Over the thousand years of its existence, the Old Town Square has been a place for social and cultural events. On the south wall of the Gothic Old Town Hall you will find a technological miracle which is the astronomical clock, an ingenious piece of equipment which has been showing not only the time and date for centuries as well as the position of the sun, phase of the moon, astronomical cycles and festivals on the Christian calendar. Every hour the astronomical clock comes alive with a fascinating spectacle of parading apostles and moving statues on its edges. Many European cities thus also strove to gain the same type of gem. There is a legend that the town councilors had its creator blinded rather than allowing such a clock to be built anywhere else.

The opposite side of the square is dominated by the monumental twin towers of Tyn Cathedral which will enchant you with its amazing appearance. It is considered the most beautiful cathedral in Prague and an important part of the panorama of the city. Inside you can see the highest altar in Prague and the tomb of the famous astronomer Tycho Brahe. There is also the Church of St. Nicholas located near the square which is definitely worth seeing.

The square and surrounding streets are pedestrian zones and during summertime tourists are relaxing and having beer or coffee here at one of the many outdoor cafes while enjoying many remarkable medieval buildings. The whole square is bordered by a large number of colorful houses, palaces and churches. Some of the most prominent buildings around the square include Old Town Hall, Tyn Church, the Kinsky Palace and the St. Nicholas Church.