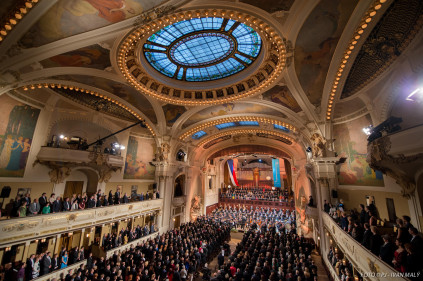 The Prague international Spring Festival is the oldest and most famous classical music festival with the highest number of concerts in the Czech Republic. It is an annual event with participation of top soloists and orchestras from all over the world.

Where the festival takes place?

Performances are held on several places through the city. Most of the concerts are held n the Municipal House (Smetana Hall) and in Rudolfinum (Dvorak Hall). The opening ceremony is traditionally held in the Municipal Hall with the Bedrich Smetana’s My Country. The Prague International Music Competition for young artists usually takes place at the same time as the festival.

The origins of this festival date back to 1946. At that time, the country was in a justifiably celebratory mood. World War II had been over for exactly one year. Ironically, the Prague Philharmonic celebrated its 50th anniversary that same year. The two events combined into the Prague Spring International Music Festival.

The 70th edition of the festival boasts a representative set of orchestras, and numerous excellent guest artists and ensembles from all over the world. The program’s highlights include many famous artistic personalities. The list of orchestras is domineered by the Budapest Festival Orchestra, the St. Petersburg Philharmonic, the Royal Liverpool Philharmonic Orchestra, and the Orchestra dell’Accademia Nazionale di Santa Cecilia. Ancient music will be represented by the Akademie für Alte Musik Berlin, and the Bach Collegium Japan, visiting Prague for the very first time.

The Prague Spring has a particular focus in supporting younger performers. The Prague Spring International Music Competition was established just one year after the festival itself, and is held each year in various instrumental sections.