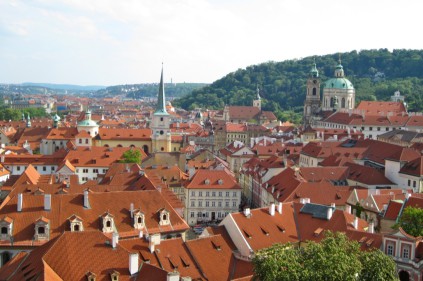 Lesser Quarter (Mala Strana in Czech) is located on the left bank of the river Vltava, on the slopes just below Prague Castle. This is a beautiful place with a unique atmosphere which offers lots of cafes, stylish restaurant, luxury hotels and also the palace gardens. It is also one of the most historic districts in all of Prague.

Though the district is one of the oldest in Prague, Baroque architecture dominates the area due to fires destroying much of the original architecture in 1541. It was created in 1257 by amalgamating a number of settlements beneath the castle into a single administrative unit. In the Middle Ages, the residents were mostly German craftsmen who had been invited by the King. It also housed a large number of noble palaces. An important factor in the development of the Lesser Quarter was the Charles Bridge which connected it to the Old Town and through which led the Royal Mile.

If you are visiting Lesser Quarter you should not miss Wallenstein Palace, a wonderful Baroque era building with five courtyards and a French-style garden. The palace currently houses the Czech Senate. Among the many churches in Lesser Quarter, St. Nicholas Church is the finest and most prominent one.

The heart of Lesser Town is its square where you can find many churches, cafes and restaurants. It has been the scene for great events and dates back to the 10th century when it began as a bustling market place where merchants traded exotic goods. Over time Romanesque, Baroque and Gothic buildings were erected around the square each reflecting the architectural era in which they were built.

In an area of Lesser Quarter not far from the river the John Lennon Wall is located, covered with Lennon graffiti dating back to the time of his death in 1980. Lennon’s fans painted the wall as a form of protest against the regime of that time, as well as a way of paying tribute to their idol. The police repainted the wall time and again, but the graffiti always reappeared. With the coming of democracy, Czechs and foreigners alike added their own touches to the wall, which is never repainted now – at least, not by the police.