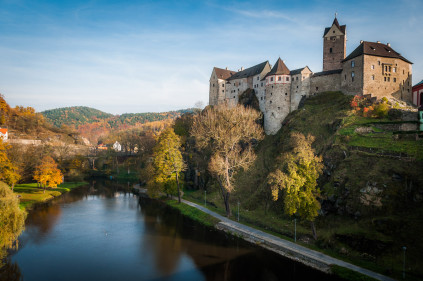 The best time to visit Loket is summer as almost everything is better in the warmer weather.

Loket is a tiny town of less than 5000 inhabitants which is located between Karlovy Vary and Sokolov. Founded in the 13th century, Loket, or elbow in Czech, lies nestled in a crook of an arm of the Ohre River surrounded on three sides by water.

The central focal point of the town is the 12th-century gothic Loket Castle. Once known as the Impregnable Castle of Bohemia, because of the thickness of its walls, it is one of the oldest and most historical stone castles in the Czech Republic. Nowadays it is divided into nine different sections which have many medieval artifacts on display. The castle and dungeons, including prison cells and the torture chamber are open to the public and the castle museum provides a lovely view of the town square and its surrounds.

Porcelain factory was established in Loket in the 19th century. The tradition continues today as can be seen in the quality of these wares which can be found in gift shops throughout the town.

From July 16-18 the town plays host to the annual Loket Summer Cultural Festival held in an outdoor amphitheater right below Loket Castle on the Ohre. The festival features performances by the Czech National Opera, but a variety of both classic and modern music events are held in this unique open-air environment.

If you prefer a little excitement in your relaxation then the Motocross FIM World Championship takes place July 25-26. It is the biggest and most famous motorsport event in the Czech Republic and features the best pro riders in the world.

As the town is surrounded by water the river walks are long and lovely and the waterfront parks perfect for picnicking, playing, enjoying the sun, or for just chilling out and doing nothing.

Comments to "Tips on visiting Loket"