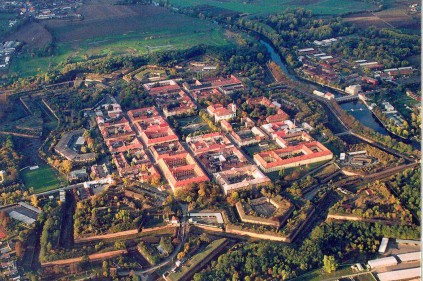 Terezin started life as a fortress town built from 1780 to 1790 to protect Bohemia from Prussian attacks. It was named by Emperor Joseph II after his mother, Empress Maria Theresa. Later in the 19th century the fortress also served as a prison to held political prisoners.

During World War II it was ghetto-labor camp to which the SS deported and then incarcerated certain categories of German, Austrian and Czech Jews based on their age, disability as a result of past military service or domestic celebrity in the arts and other cultural life. It was a general fiction used by Nazis to hide the nature of deportations.

Terezin was not a death camp by the usual definition comparing to Auschwitz-Birkenau or Treblinka where hundreds of thousands were gassed or murdered in other ways each year. Terezin, by comparison was a place to which people would apply so as to avoid a worse fate.

There is a Terezin monument dedicated to the victims of the holocaust including a whole complex of buildings spreading out on both sides of the River Ohra. Its main parts are made up of the Small and Big Fortress built according to a design from the famous school in the French town of Mezières. The dark history of Terezín falls especially in the period of World War Two. The daily suffering and inhumane conditions for the lives of the tens of thousands of Jews who were deported here is evident every step of the way. Walk past the former accommodation quarters, the famous chapel in the Magdeburg barracks, the Columbarium with its ceremonial rooms or the Ghetto Museum. The monument plaques and cemeteries in the areas around Terezín commemorate the sad stories of those who were imprisoned here.

Despite the terrible living conditions and the constant threat of deportation, Terezin had a highly developed cultural life. Outstanding Jewish artists mainly from Czech Republic, Austria, and Germany created drawings and paintings, some of them clandestine depictions of the ghetto’s harsh reality.