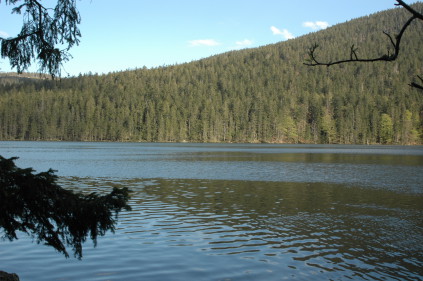 Sumava’s lakes, which are located at over 1,000m above sea level in the Czech Republic, are among the jewels of the area’s countryside. The biggest and the most popular are the Black and Devil’s Lakes, the route to which is along the yellow hiking trail from Spicacke sedlo.

The Black Lake boasts several records. It is the largest lake in Sumava and indeed the entire Czech Republic. It is also Sumava’s deepest and lowest lying lake. Its name comes from the lake’s black color, which is caused by the reflection of the surrounding dark forest. From the Black Lake you can reach the Devil’s Lake by following the red trail; it will take you through roots and tree stumps to the crossing at Jezerni potok.

The Devil’s Lake is the hardest lake to reach in Sumava, but it is also the most beautiful. Legend has it that the devil gave the lake its name. In fact, he is said to have drowned when a stone was tied to his tail by a girl who he wanted to drag down to hell; 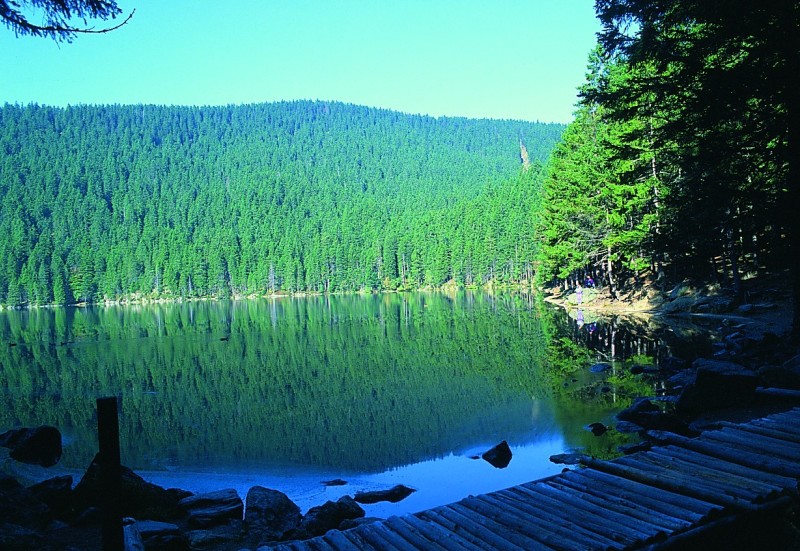 as he descended, he dug out the valley in which the lake lies. It is also said that to this day strange figures and creatures sometimes emerge from beneath its surface.

Sumava’s lakes are an illustrious example of what nature is capable of creating over several thousand years. The same goes for the Boubin primeval forest, where you can experience a forest whose trees are up to 400 years old. At one point, this spot was home to a water-powered sawmill named Cenkova Pila. A walk along the Vydra, with its enormous boulders, will make you feel like you are in the Alps. It is also a good idea to visit Prasilske Lake. The best view of it can be enjoyed from the Polednik lookout tower. Indeed, the Sumava Mountains in general offer some of the highest viewing towers in the Czech Republic.