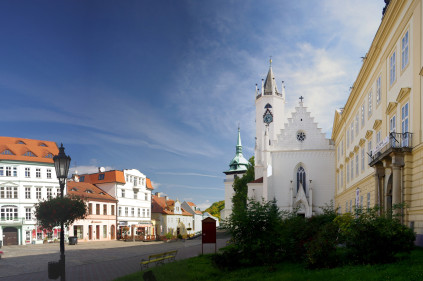 All sightseeing in city "Teplice"

Teplice is a statutory city located in the Usti nad Labem region of the Czech Republic. It is the second largest spa town in the country after Karlovy Vary. Teplice is situated in northwestern Bohemia near the border with the German state of Saxony and has a population of about 50 000 inhabitants.

The thermal springs of Teplice are said to be discovered in 762, but the first authentic mention of the baths occurred in the 16th century. After a blaze in 1793, large parts of the town were rebuilt in a Neoclassical style. The health resort was a popular venue for wealthy bourgeois like the poet Johann Gottfried Seume or Ludwig van Beethoven, who met here with Johann Wolfgang von Goethe in 1812. During the Napoleonic War of the Sixth Coalition, Teplice in August 1813 was the site where Emperor Francis I of Austria, Emperor Alexander I of Russia and King Frederick William III of Prussia first signed the triple alliance against Napoleon I of France that led to the coalition victory at the nearby Battle of Kulm.

The Teplice healing springs are used to treat illnesses of the loco motor system, neurological illnesses and illnesses of the circulatory system, the heart and vascular problems. Over the centuries, their unique effects have also been discovered by such personalities as the composers Chopin and Liszt or the German poet Goethe.

You can stay in one of four spa houses in Teplice. The most imposing of these is the Imperial Spa, which gained its name from its most famous guest – the Austrian emperor Franz Josef. Right in the historical centre of the city lies the Beethoven Spa House, surrounded by extensive parks. You will find the unique Salt Caves in the Stone Spa and the New Spa is designed especially for children.