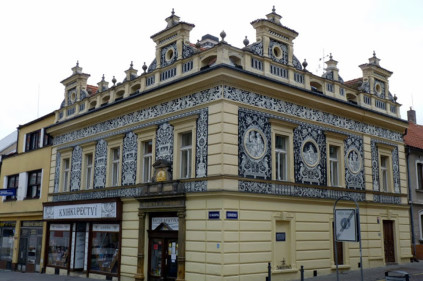 All sightseeing in city "Kladno"

Kladno is a mining city in Central Bohemian region of the Czech Republic. Located 25 kilometers northwest of Prague, this is the largest city of the region with a population of around 73 000 inhabitants. Kladno is a part of the Prague metropolitan area.

The growth of Kladno and its economic potential contributed to the change of status as it was promoted a town in 1870. At the end of the 19th century in 1898, the town was awarded an honorary title of royal mining town.

The city was the historical birthplace of heavy industry in Bohemia. There are local deposits of iron, but most is imported. Kladno has blast furnaces and a rolling mill as well as large steelworks. Finished parts for the machine industry, cables, bicycles and semi-finished products are manufactured here. The proximity to Prague helped Kladno to keep the local economy stable in spite of the decline after the collapse of the communist regime.

There are lots of beautiful historical sights in the city. Chateau in Zadusni Street in Kladno was originally a fortress with only preserved original part of a Gothic basement. Nowadays this is a seat of Chateau City Gallery, Sladecek homeland museum in Kladno and a branch of the City Library Kladno. Amazing Town Hall located on the Mayor Pavel Square is designed in New Renaissance style by Jan Vejrych and decorated with a sculpture of a knight by Antonin Popp. Nowadays the town hall is the seat of Kladno authorities and Kladno Municipal Office.

On the main square of the city you will find both a beautiful fountain and the statue of St. Jan Nepomucky which were built in 1706 as one of the evidence of Nepomuck’s respect before his official canonization.

On the Mayor Pavel Square of Kladno you will find the statue of Virgin Mary. Almost 10 meters high late-baroque sculpture is designed by K. H. Dientzenhofer in 1739-1741 under the sponsorship of the Brevnov abbot Benno Lobl.