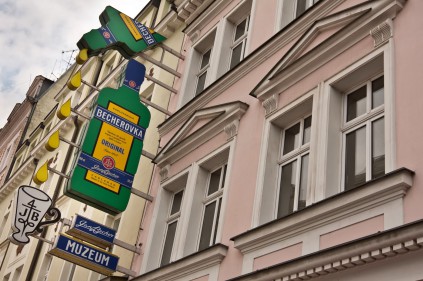 Karlovy Vary produces popular herbal liquor called Becherovka (often referred to as “14th spring”). Jan Becher founded his company more than two centuries ago and nowadays, Becherovka is a world famous brand. The secret of its ingredients is carefully guarded and is only known to two people.

This bittersweet Czech liquor consists of simple and purely natural ingredients such as Karlsbad water, alcohol, sugar and a mixture of herbs and spices. You can drink Becherovka straight or use it as a base for cocktails. The drink is only manufactured in Karlovy Vary because the local spring water is a vital ingredient.

In 1807 Jan Becher put together a recipe for the spirit in his pharmacy located in Karlovy Vary where now the Becherovka Museum stands. The museum has two entrances but the one on the right is what you need. Tickets cost 100 crowns for adults, 50 crowns for students and include three drinks as well as 30 crowns discount on Original Becherovka from the factory store.

It is not the kind of museums where you can wander through at your own pace. There are several guided tours each day and the board in the front window explains which language groups will begin at which time. The museum is close to the bus and train stations so it is no problem to get there.

You will be shown counterfeit labels, historical equipment for weighing and blending herbs as well as underground tunnels lined with the dozens and dozens of oak barrels in which the drink is aged for two months before being bottled. The barrels are handmade in Moravia around the turn of the 20th century are still in use.

There is a tasting room that resembles an old pub but it’s only shown to important characters like movie stars who visit during the international film festival. You will be offered to taste the three liquors in a larger, more modern room while watching a short video presentation.