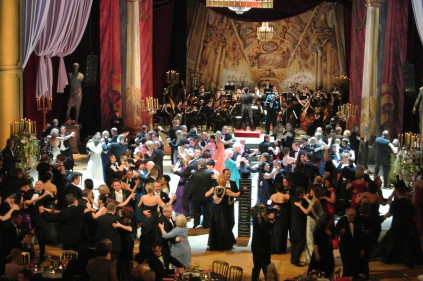 One of the main Czech social events of the year is Opera Ball. It is usually held in the finest venues in Prague such as Marble Hall, State Opera or Lucerna Palace which will be transformed into a ball room throughout the night. The Opera Ball is attended by people of all ages. The music is varied as the themes: traditional or smart balls. The list of the themes is practically endless, so you should research it well in advance.

Although the Opera Ball held in Czech Republic lacks the tradition of the world-famous Vienna Ball, it is nevertheless among the highly-anticipated events with an international character and significant charitable context. Everyone who wants to be seen goes to a gala and enjoys an evening full of music, dancing and great food and drink with the feeling of the modern aristocrats. Cavaliers escort their partners to this event in order to enjoy this magical evening. Every year a host of celebrities and high-born personalities receive invitations every year and add a unique luster and prestige to the Opera Ball.

The previous year’s ball was a tribute to the Viennese father and son and the composer of the same name Richard Strauss who was born 150 years ago. The famous Viennese Strauss Dynasty consists of the composers who made the waltz famous around the world. The Opera Ball resonates with the sounds of the famous Radetzky March by Johann Strauss, and The Blue Danube and The Gypsy Baron by Johann Strauss the Younger.

Though the ball season was always popular during the Austro-Hungarian Empire and the First Republic, Prague didn’t receive its first opera ball until January 1948. It should be noted that there are a few differences between opera balls held by Czechs and Austrians. The debut of young women may be common in Vienna, but it is not a tradition in Czech Republic due to communism.