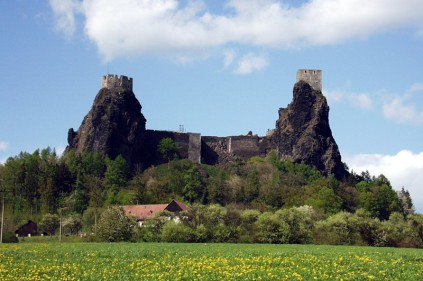 Trosky Castle is located in the center of Czech Paradise area of the Czech Republic. It stands on two volcanic rocks and can be seen from very far away in almost every direction. The castle was built in 14th century and supposedly was never conquered. It was deserted after the imperial army burned it down during the Thirty Year War in 1648.

The symbol of Czech Paradise, the castle features two towers named Baby and Panna which translates as Grandma and Maiden. The location on two steep rock cliffs meant that Trosky Castle was difficult to conquer – even the Hussites were not successful. However, if you take a tour around the premises, you can get to know a lot about the rich history of the castle and its development and you can climb the famous towers offering gorgeous views. Due to fire and war the structure is now a grand ruin. Trosky Castle is extremely popular with hikers and lovers of castles.

The castle was founded by the knight Cenek of Vartenberg at the end of the 14th century as a beautiful and impregnable residence. After Cenek’s death the castle became the property of the king Wenceslas IV, who later sold it to Otta of Bergov. Bergov was said to have razed a local monastery and hidden its treasures in the cellar of the castle, which he blocked with an enormous boulder. It is said that the treasure is still hidden somewhere in the depths of the castle’s foundations.  Many tourists climb the stairs.

In 1438 the castle fell in the hands of robber barons Sof of Helfenburg and Svejkar. At present the castle in the property of the Czech state is under restoration. The castle and the observation platform are open to public.