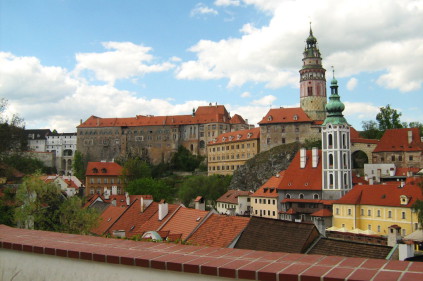 The Cesky Krumlov Castle and Chateau is the second largest castle complex in the Czech Republic. Its size and architectural level, reflecting architectural styles from the 14th to the 19th century, make it one of the most important architectural monuments in the world. Since 1992, this architectural gem has been listed as a UNESCO World Heritage Site, along with the town’s historic centre.

More than 40 buildings in the complex

It consists of over 40 buildings built over the centuries near the left bank of the Vltava River. The nucleus of the castle complex began with the tower and its adjacent Hradek, or Little Castle. The other buildings and palaces are grouped around five courtyards all closed in on the southwest by the 11-hectare castle garden, founded in the 1670’s. A tour of its chambers will allow you witness the development of architecture from 14th to 19th century.

On the last, fifth, courtyard there is the Baroque Chateau Theatre. It is one of the two well-preserved theatres in Europe, with the other one being as far as in the Swedish Drottningholm. In the theatre you can still see not only the preserved stage, auditorium, orchestra pit or stage machinery but also costumes and props.  The tower dates from the half of the 13th century and it is a prominent symbol of the town’s rich history. Inside you can find a belfry with four bells and a dungeon, more than four meters deep. You should not miss out on the marvelous chateau garden from the Baroque era, either.

The impressive view from the high Cloak Bridge overlooks the houses of the historical town center and the steeple of the St. Vitus Church. Also well worth a visit in the castle are two galleries, the Gallery of Czech Culture on the 2nd courtyard and the International Gallery of Ceramic Design in the Vaclav Cellars.

During the season from April to October, the chateau garden is open with its Rococo Cascading Fountain and castle pond. The garden area includes the elegant Bellarie Summer House as well as the famous revolving auditorium.