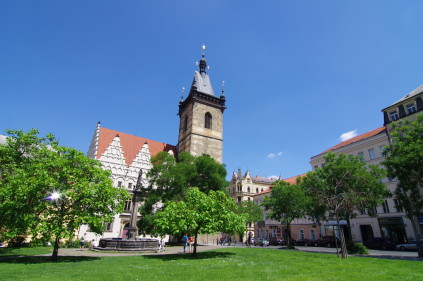 The New Town Hall is located near Charles Square in the New Town. Historically this is one of the most important buildings in the area. It dates back to the reign of King Charles IV and was intended to be a center of municipal administration and law court.

The construction of the town hall began in 1337 and was finished in 1418. The building had to be rebuilt several times but some elements have survived to the present day. Despite its name, New Town Hall was built almost at the same time as the Old Town Hall – the name refers to its location rather than to the time of its construction. However, it does look much more recent since, like most buildings in the area, its architecture was greatly modified in the 19th century. Only its original Gothic tower remains to remind people that this was the site of Prague’s first defenestration which took place on 30th of July 1419. Back then a crowd of radical Czech Hussites stormed in the building after a stone had been thrown at Jan Zelivsky, a Hussite priest, from the window of the town hall. Jan Žižka, an army leader, attacked the town hall and once inside they threw about 15 people out of the window (including the judge and the burgomaster). They were either killed by the fall or by the mob. King Václav IV (son of Charles IV) was so shocked after hearing the news that he died a little time later.

Up until 1784, New Town was one of the four independent towns that were united to form the city of Prague – the others were Hradčany (Castle Hill), Malá Strana (Lesser Quarter), and Staré Město (Old Town). The town hall then became obsolete and today it is used mainly for social functions and cultural events, although its tower remains open to visitors on a daily basis.