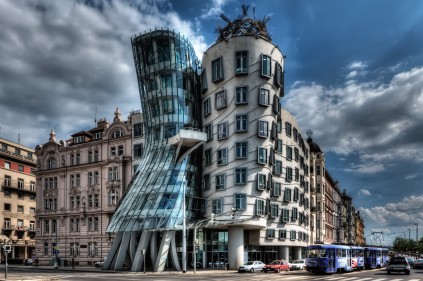 What is Dancing House?

Dancing House is the nickname given to a building designed by Croatian-born architect Vlado Milunic in a co-operation with Canadian architect Frank Gehry. Built between 1994 and 1996, Dancing House is a modern contrast to Prague’s historic attractions.

The building is an example of a deconstructivist architecture with an unusual shape. You can actually see a couple – woman and man dancing together and holding their hands with a skirt that sways to the music. It is also called “Ginger and Fred” referring to Ginger Rogers and Fred Astair – the legendary dance duo.

The Dancing House is one of the most interesting Prague houses built at the end of the 20th century. It was awarded the Design of the year 1996 award from the American Time magazine.

There used to stand a Neo-renaissance house before but it was demolished by an American air attack in 1945. The space was empty for several decades and in 1992 the Dutch company Nationale Nederlanden bought the place and decided to build an administrative center there.

Its unusual shape and technical solutions caused a big public debate. After ten years the house has its place in modern Prague. In 2005 the Czech National Bank issued a gold coin with the motif of the Dancing House, as the final coin of the series “10 Centuries of Architecture.”

The house is located on the corner of the embankment Rasinovo nabrezi and the street Resslova, within walking distance from the underground station Karlovo namesti.

The house is used as an office building and only the top floor of the building is open to public. However, you can visit one of the city’s leading restaurants called Ginger and Fred Restaurant, located on 7th floor, with a nice view of the river and Prague Castle panorama.