Social customs in the Czech Republic 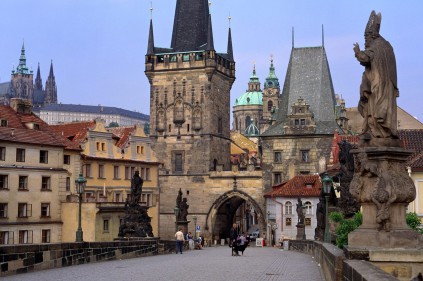 ...
Czech people are very hospitable and enjoy being a nation of realistic and very practical people.

Ethnic groups in the Czech Republic

The Czech society is composed of 95% of nationals and includes minorities of Slovaks, Gypsies, Poles, Germans and Vietnamese. There are lots of other nationalities living in major towns of the country.

Although Czech is the official spoken language, the younger generation understands and speaks English. The older generation will more likely to understand Russian or German.

Czechs seem rather reserved when introduced to a new person. Usually, they do not trust people they do not know. Their behavior may appear formal. The reason may be the use of the second-person in Czech language which is the ‘polite’ form. It is used with people whom you do not know, in a formal social interaction, or when younger generation is addressing the older one.

Another reason why the Czechs do not trust strangers comes from the communist era when many people were forced to betray each other. These are partially the roots of their sense of humor or a general attitude which may be perceived as ironic or sarcastic.

Czech people are naturally very polite and do not tend to be overly direct in communication. They generally avoid confrontation – informal straightforwardness in dealing is common. After getting to know them better you become to love their cheerful and helpful character and you can experience what a warm and firm friendship is about. They are very hospitable and enjoy being a nation of realistic and very practical people.

One of the things you will immediately notice in the Czech Republic is that people say hello and goodbye to complete strangers in different situations and if you come from an English-speaking country this may seem weird. When it comes to physical contact you’ll notice that Czechs tend to shake hands a lot which is a standard form of greeting.

The Czechs are obsessed with taking off your shoes indoors and then selecting appropriate footwear for wearing inside the house. Basically you should always take off your outdoor shoes when entering a Czech flat or house.

Comments to "Social customs in the Czech Republic"