National anthem of the Czech Republic 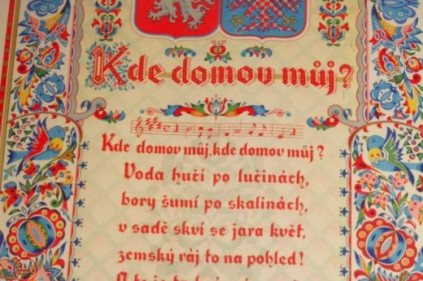 ...
The Czech national anthem is formed by the first strophe of a song ‘Kde domov můj’ (English: ‘Where is my Homeland?’).

The music was composed by František Škroup a main Revivalist composer of Czech music and especially Czech opera. The lyrics were taken from the first stanza of the opera “Fidlovačka” which was written by Josef Kajetan Tyl and performed in 1834. The song originally had two verses but when it became the first part of the Czechoslovak state anthem after the country’s liberation in 1918 only one verse was used. Upon dissolution of Czechoslovakia on 1 January 1993, the song became the anthem of the new Czech Republic but only the first verse remains the official anthem.

It soon became popular among people and gained status of a national song. The national anthem is possible to play and sing upon occasions of national holidays as well as other events when it is usual to do so (e.g. upon openings of international sports matches, upon internationally or ceremonially important culture events and similar).

The Opera was first run on December 21, 1834. There were lots of different reactions. Some were praising the Opera as a unique patriotic piece while others criticized it for being too vulgar. There was a long debate going on as to whether a more serious piece should be composed for similar purposes. But when the independent Czechoslovakia was established in 1918, the disputes gradually calmed down and the song was chosen as the first part of the country’s anthem. The second part was made up of the Slovak song “Storm over the Tatras”.

Czechs have had a few other songs that have been considered important and representative but “Where is my homeland” achieved the status of an officially recognized anthem. When Czechoslovakia split up in 1992, the Czech Republic decided to maintain it among its state symbols, and it is the national anthem to this day.

Comments to "National anthem of the Czech Republic"