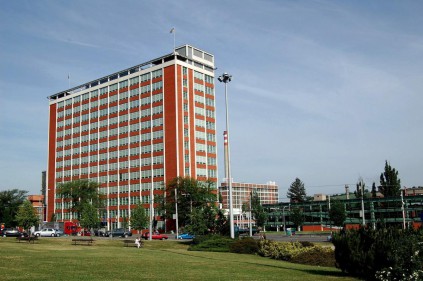 All sightseeing in city "Zlin"

Zlin is situated in the Zlin region of the southeastern Moravia in the Czech Republic. The city is known for its Bata Shoe Factories and modern architectural brilliance.

The history of the city dates back to the thirteenth century. It gradually became a great center of culture, art and crafts. Expert craftsmen from Zlin have always earned appreciations from the art lovers. As a center of art, Zlin has managed to retain its rich heritage. The first written record of the city dates from 1332. The town grew rapidly after Tomas Bata founded a shoe factory there in 1894, which came to supply the Austro-Hungarian armies in World War I.

Public transport in Zlin has a long history. In 1899 the city was connected with to the railway network, helping its expansion. In the 1920s local passenger transportation started to operate. Later the town council decided to build three trolleybus routes, numbered lines A, B and C. New trolleybus lines were finished after the construction proceeding during the Nazi occupation. Zlin’s public transport, now owned by DSZO (Zlin & Otrokovice Transportation Company) was one of the fastest-growing public transportation networks in the Czech Republic.

The city is currently served by 13 bus routes and 13 trolleybus routes, and also railway services on line 331, which runs from Otrokovice (located on the international corridor) to Vizovice. There are nine stations on this line within the city of Zlin, the largest of which is Zlin stred (Zlin central).

Nowadays Zlin is the county seat. The city is also home to the Tomas Bata University, which opened in 2001. With approximately 12,000 students the university offers courses in technology, economics, humanities, arts and health care. As with other larger cities there are lots of shopping malls, cafes, restaurants and pubs. The buildings of the former Bata Company have been renovated, abandoned or demolished.