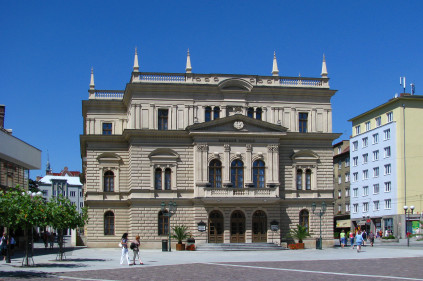 All sightseeing in city "Opava"

Opava is located in northern part of the Czech Republic in the Moravian-Silesian region of the country. Situated on the confluence of Opava and Moravice rivers the city has a population of about 60 000 inhabitants. It is a former royal capital and the capital of Silesia. In 1990 it became a Statutory City.

Life in the town is concentrated in the area of both of the main squares of the present time – Upper (Horni) and Lower (Dolni) Squares. The Lower Square is dominated by St. Vojtech’s Church, the Upper Square abounds in many historical and architectural gems, too. You can take a tour through the city watchtower called Hlaska and see the building of the Silesian Theatre, the gothic jewel that is the Virgin Mary’s Assumption Concathedrale or the area of the historical fish market.

The spectacular noblemen‘s palaces, the Blucher’s and Sobek’s are situated in Masarykova Street. Another beauty spot of the city of Opava is the Minorite Monastery along with the Church of the Holy Spirit. There lie the relics of Opava‘s Premyslids in its crypt.

The Silesian Theatre plays an important role not only for the town itself.  It began entertaining the general public with drama and opera performances more than 200 years ago. Every year Opava hosts town festivals, Dalsi brehy in spring and Bezruc‘s Opava in autumn. During these cultural holidays the town brightens up with the imagination and originality of dozens of cultural events including nearly all possible kinds of arts – theatre, film, visual art, literature and music.

The city is also a regional center of sports – both recreational and professional ones. There are regular inline skate rides called Blade nights. The skate park located in the quiet zone of the Town Park is for all age categories.  You can also find a multi-purpose sports hall, swimming pool and water channel for canoeists in its surroundings. There are many sports clubs and associations in Opava. The highest men’s competition in basketball is played there, and it also has one Olympic winner.

Sights:  Silesian Museum, Tower Hlaska, Cathedral of the Assumption of the Virgin Mary