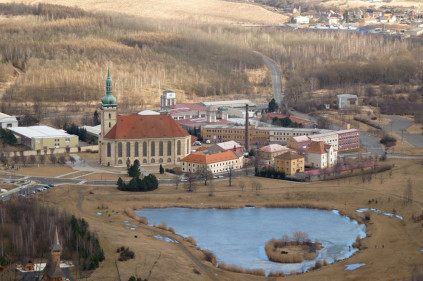 All sightseeing in city "Most"

Most is a city located in the northwest of the Czech Republic in the Usti nad Labem region of the country. It lies between the Central Bohemian Uplands and the Ore Mountains along the Bilina River. The town was named after the system of bridges that cross the swamps in this area in the 10th century (most means “bridge”).

The city is mostly known for its heavy industry. Most lies in the center of the northern Bohemian lignite-mining region and serves as an important industrial railway junction. Other industries include textile, ceramics, steel and chemicals. Most is considered to be one of the most polluted coal mining towns in the Czech Republic. In recent years the environmental conditions have improved and even growing of apples and grape vines has developed.

In 1964 there was a demolition of the historical old town in order to make room for the expanding lignite mines in the area. Some historic buildings including a brewery dating from 15th century and a theater built in 1910. New low-cost multi-family housing projects were built known as panels. The demolition work ended in 1970. Although almost all historical buildings were demolished, it was decided to preserve the Gothic Church of the Assumption of the Virgin Mary. The whole structure was moved by train to the newly constructed town. The move took 28 days to complete. The building was also mentioned in the Guinness Book of World Records as the heaviest building ever moved on wheels.

There are not many historical sights in Most as it is redeveloped city, but there are two important ones: Hnevin Castle and the Gothic Church of Assumption of the Virgin Mary. Also there are lots of amusement facilities such as planetarium, observatory, autodrome, aquadrome or hippodrome.