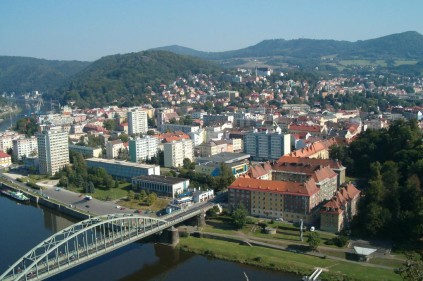 All sightseeing in city "Decin"

Decin is a city located in the Usti nad Labem region of the Czech Republic. It is situated in the gorge of the Labe River near the German border. Dominated by its 18th-century castle on a 165-foot crag, it is the economic and cultural centre of a scenic tourist region noted for its deep valleys and rock formations. Founded in the 12th century, Decin was strongly German until World War II. It is also an active river port, once the headquarters of the Elbe boatmen’s syndicate. Industries include metalworking and the manufacture of paper, textiles, and chemicals.

Decin Castle is the most popular tourist attraction in the town. Built on a hill near the town centre and overlooking the Labe River, the castle has an extremely varied history. It was a fort during the Seven Years’ War and became a Renaissance castle in 1673. Once the home of Bohemian kings the castle has since functioned as the administrative centre of the Thuns and even as a military garrison for German and Soviet troops after being handed to the Czechoslovak state in 1932. In 2005 restoration was completed of a large part of the castle and it was opened as a museum and venue for private gatherings and public events. Most of the inventory had been taken away by the Thuns after they sold the castle to the Czechoslovak state in 1932. Much of the remaining period furniture was gradually stolen, but some pieces which had been kept at other museums were returned.

In the river Labe near the left bank there stands a basalt stone which is only visible when water levels are low, which usually means the region is suffering from drought. The stone is known as the Hunger Stone, because in old times, when it appeared, all boat traffic on the river came to a halt, and people suffered as a result.